Brooks, J.*, Kano, F.*, Sato, Y., Yeow, H., Morimura, N., Nagasawa, M., Kikusui, T., Yamamoto, S. (2021). Divergent effects of oxytocin on eye contact in bonobos and chimpanzees. Psychoneuroendocrinology, 125, 105119. (co-first/correspondence)
Administering nebulized oxytocin is an increasingly popular technique (with no reported side effect) to examine the effect of this evolutionary-old neuropeptide affecting various sides of social behavior in humans, dogs, and monkeys. We for the first time administered nebulized oxytocin (and control placebo saline) to humans' two closest relatives, bonobos and chimpanzees and examined the changes in social attention, in particular the frequency of eye contact to conspecific images. We found that, as reported in other species, bonobos increased eye looking in response to oxytocin. However, interestingly, there was a significant species difference in the effect of oxytocin between bonobos and chimpanzees. Chimpanzees rather decreased eye looking and instead increased mouth looking. It was previously identified that bonobos make more eye contacts than chimpanzees (see below). Thus, oxytocin can be suggested as one of the drivers that could enhance the divergence of social behavior (an existing species difference) in hominoids.
Kano, F., Sato, Y., & Yamanashi, Y. (in press). How chimpanzees look at movies: The “Art and Science” project in Kyoto City Zoo. Japanese Psychological Research.
In this outreach project, we asked professional contemporary artists to make movies 'for chimpanzees' and compared chimpanzees' and humans' responses to the movies in eye-tracking. Both chimpanzees and humans looked at similar elements of movies, such as the appearance of animal figures, targets of actions, and the center of abstract concentric figures. The differences between chimpanzees and humans were also pronounced; for example, human showed strong 'center bias' by keeping their gaze around the center of the screen, while chimpanzee did so to a lesser extent. This study not only offered comparative knowledge about responses to (artistic) movies in chimpanzees and humans but demonstrated how non-scientists can learn comparative psychology through an outreach project.
Kano F, Krupenye C, Hirata S, Tomonaga M, & Call J (2019) Great apes use self-experience to anticipate an agent’s action in a false-belief test. Proc. Nat. Acad. Sci. 116(42):20904.
We showed that great apes can use their self experiences to infer whether the actor can see through the barrier in a false belief task. Two groups of great apes have first experienced different properties of a barrier in reality. One group experienced that the barrier cannot be seen through (normal barrier). The other group experienced that the barrier can be seen through (see-through barrier). The barrier looks untransparent and identical from afar. After this, both groups have watched the same video in which an actor hid behind the barrier while his object of interest is translocated. When the actor tried to retrieve the objects, the apes who have experienced the normal barrier have anticipated the actor's action as if he has a false belief and the other apes who have experienced the see-through barrier anticipated the actor's action as if he has a true belief. This result shows that apes can integrate their own experiences in their understandings about what the actor knows, therefore do not simply use superficial behavioural cues of the actor. Featured in The Atlantic, Smithonian, An introductory article by Alia Martin (Martin A (2019) Belief Representation in Great Apes. Trends Cogn. Sci. 23(12):985-986.) 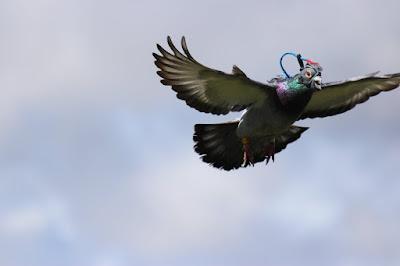 Kano F., Moore R., Krupenye C., Hirata S., Tomonaga M., Call J. (2018) Human ostensive signals do not enhance gaze following in chimpanzees, but do enhance object-oriented attention. Animal Cognition, 21(5), 715-728.
We tested if chimpanzees respond appropriately to the human experimenter's 'ostensive' cues; the cues that a human adult often uses to indicate her/his intention of informing something useful to others. Previously, human 6-month-olds and domestic dogs followed the experimenter's gaze more often after they saw the ostensive signals, such as eye contact and calling names. We found that chimpanzees did not behave in the same way as human infants and dogs; they followed the gaze equally often after they saw the ostensive signals. However, they, especially those chimpanzees who had kept close relationships with human experimenters since youth, looked the objects (both looked- and non-looked-objects) more often when they saw the ostensive signals vs. the control cues. The results indicate both limitations and potentials in the chimpanzees' ability to understand humans' intention to communicate.

Kano F., Shepherd S.V., Hirata S., Call J. 2018 Primate social attention: Species differences and effects of individual experience in humans, great apes, and macaques. PLOS ONE 13(2), e0193283.
We examined if there are differences among species and individuals in attention to social video stimuli in great apes, monkeys, and humans by testing more than 40 nonhuman primate individuals. Indeed, apes, monkeys, and humans were clearly distinguished from one another. Among great apes, bonobos were distinguished from the other species. We also found that individual experiences such as rearing history (institute-reared, zoo-reared, biolab-reared) affected social attention among chimpanzees. Interestingly, we also found the effect of expertise in human primatologists and non-primatologists; they clearly differ in their viewing patterns for chimpanzees in the videos (an effect of expertise).

We examined if great apes anticipate, with their looks (so-called anticipatory looks), an agent’s action based on the agent’s false beliefs. We followed a seminal infant study (Southgate, Senju, Csibra, 2007) for the general design to test false-belief understanding and also followed Kano & Hirata (2015, Current Biology) to make optimized videos for apes. We created two videos having the same general design (after the seminal infant study) but differing in scenarios. Apes reliably anticipated that the agent would act according to false beliefs in two scenarios.

We applied an infrared thermo-imaging to examine the chimpanzee's emotional responses to a playback of conspecific fights. Chimpanzees dropped their nasal-tip temperature in response to the stimuli. A remote measurement of skin temperature is a promising technique in this field. 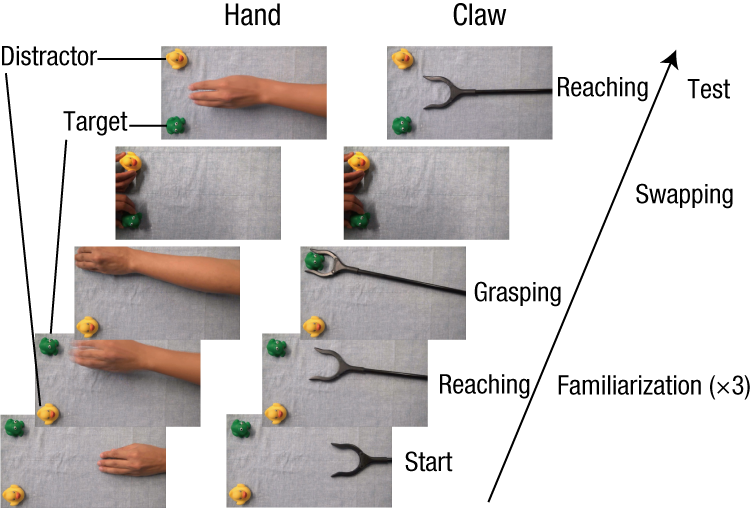 I tested if great apes (chimps, bonobos, orangs), like human adults and infants, predict reaching actions by eye movements. Apes were familiarized to movie clips of a human hand reaching to grasp one of two objects. Then object locations were swapped, and the hand made an incomplete reach between the objects. In a control condition, a mechanical claw performed the same action. Apes predictively looked at the familiarized goal object rather than the familiarized location when viewing the hand action. However, they did make no prediction when viewing the claw action. 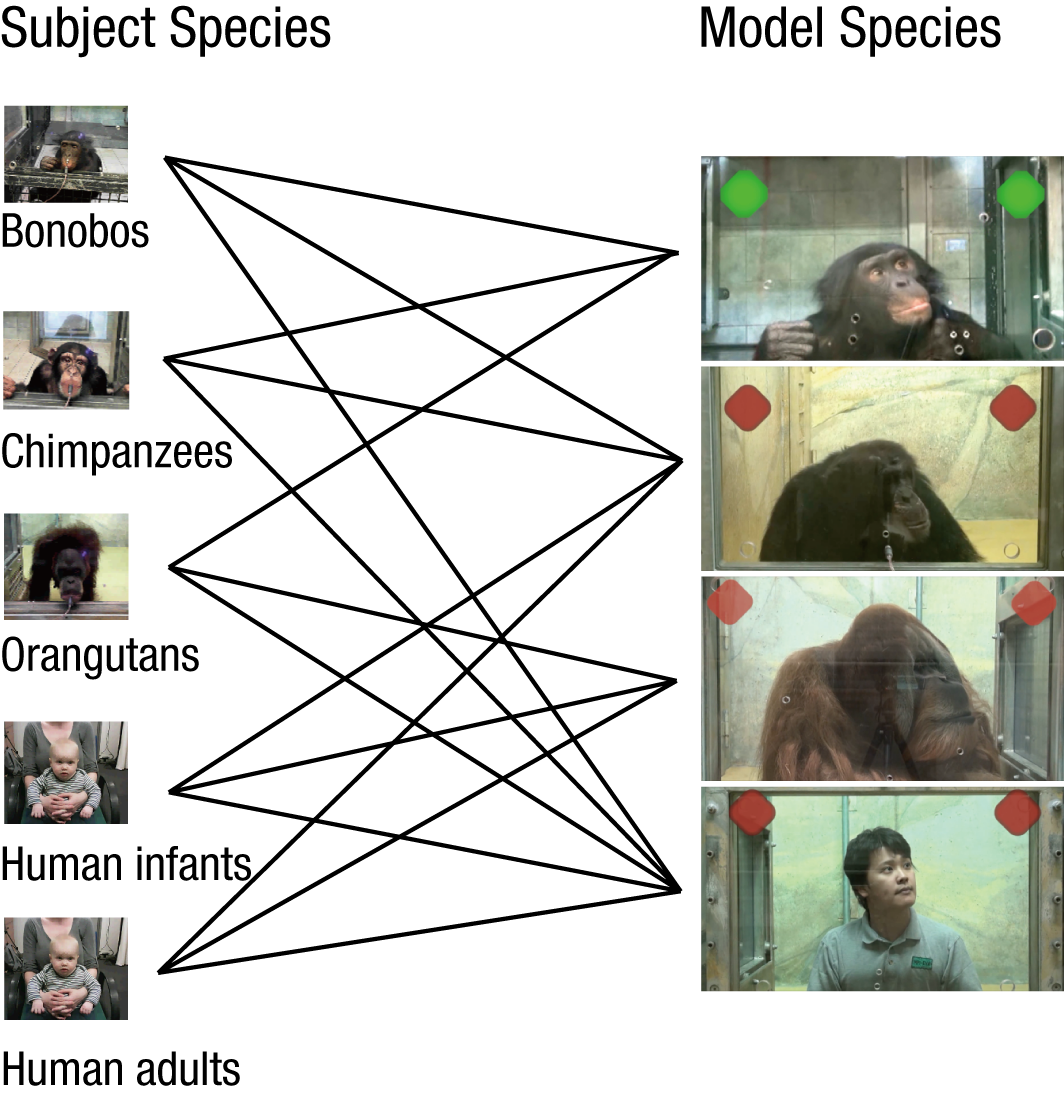