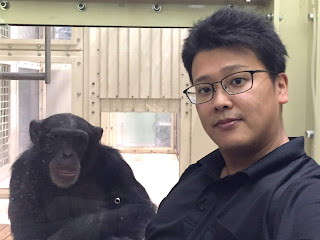 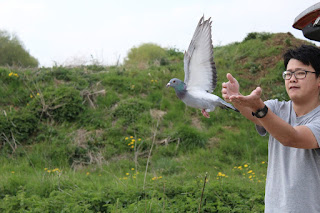 I am interested in the evolutionary origin of social intelligence, and particularly the study of animal social cognition in naturalistic situations. I mainly study this through observation of gaze, as the direction of attention reveals a great deal of mental process in both human and nonhuman animals.
2021- : As a junior group leader at the Center of Advanced Study of Collective Behavior at Konstanz, I will start working on collective behavior and social cognition of birds (pigeons and crows) and primates (apes, monkeys, and humans) in collaboration with Max-Planck Institute of Animal Behavior.
2016-2017: At the University of Oxford (with Dr. Dora Biro), I studied navigation and collective behavior of homing pigeons using self-built wearable devices which record their gaze and body movements during free flights.
2014-2021: As an assistant/associate professor at Kumamoto Sanctuary, Kyoto University, I studied cognition and emotion of bonobos and chimpanzees using various cutting-edge techniques including non-invasive eye-tracking and thermo-imaging.
2012-2014: As a post-doc, I continued eye-tracking studies by expanding study species to all great apes and human infants and children at Max-Planck Institute for Evolutionary Anthropology, Leipzig, Germany (with Dr. Josep Call).

2007-2012: At Primate Research Institute, Kyoto University, I worked with chimpanzees using computerized methods including eye-tracking and touch-panel and received my Master and Ph.D. degree (with Dr. Masaki Tomonaga).

Introducing my group's aims：
My group aims to understand dynamics of social interaction in both humans and nonhuman animals using cutting-edge tracking technologies including large motion-capture systems (the Imaging Barn/Hangar), gaze-tracking (wearable eye-trackers) and computer vision techniques (multi-array cameras and drone). More specifically, our goal is to identify key interactive components among individuals, as well as key cognitive and emotional traits of individuals, that lead to successful synchronization and joint action of a collective. To achieve this, we rely on cutting-edge technologies to track fine details of postures and eye/head directions of animals/humans during social interactions, and comparative cognitive approach to gain insight into their mental processes. My group will work with multiple species, including birds (pigeons and crows), primates (great apes and monkeys), and human adults and target various collective behaviour, including team cooperation (in humans), vigilance (in pigeons), and collective foraging (in all animals). A series of these studies will lead to quantitative understanding about dynamics of social interaction in naturalistic real-life social interaction across species and establishment of posture-tracking methods across species (not only model species) and across behavioural contexts (not only under controlled lab conditions).
ホーム
登録: 投稿 (Atom)